All Skins of Barbarian King in COC

Here are all skins of Barbarian King in Clash of Clans. Check out its looks and beauty here. 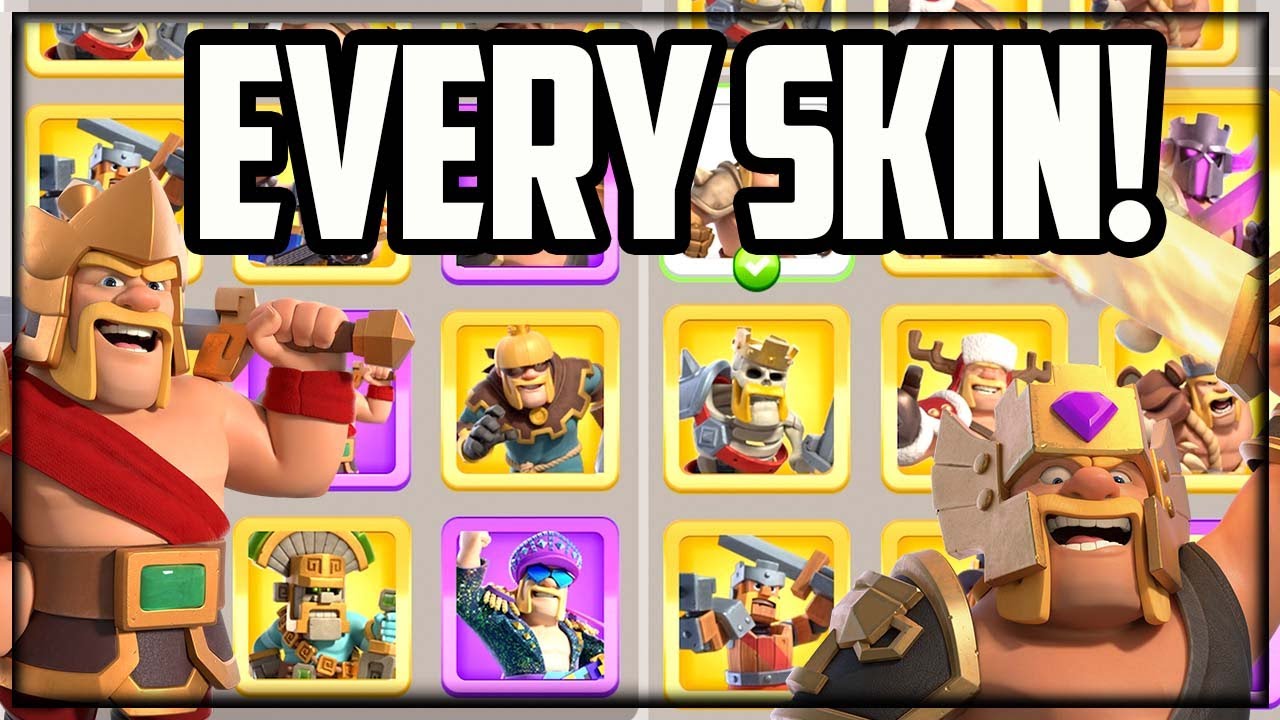 Clash of Clans is a multiplayer battle game. There are many troops to attack a base and also there are heroes to assist them.

Heroes are magical troops that are versatile when reached to special abilities. Few years ago, Supercell introduced skins to heroes along with Royal Pass.
Recently, Grand Warden's Summer Warden and Miner Skin for Archer King.

Barbarian King is strongest among them all and his ability to consume the dark elixir has made him bigger than any other troops.

Almost all the skins cost about 1500 gems. But skins can also be acquired from royal gold pass. 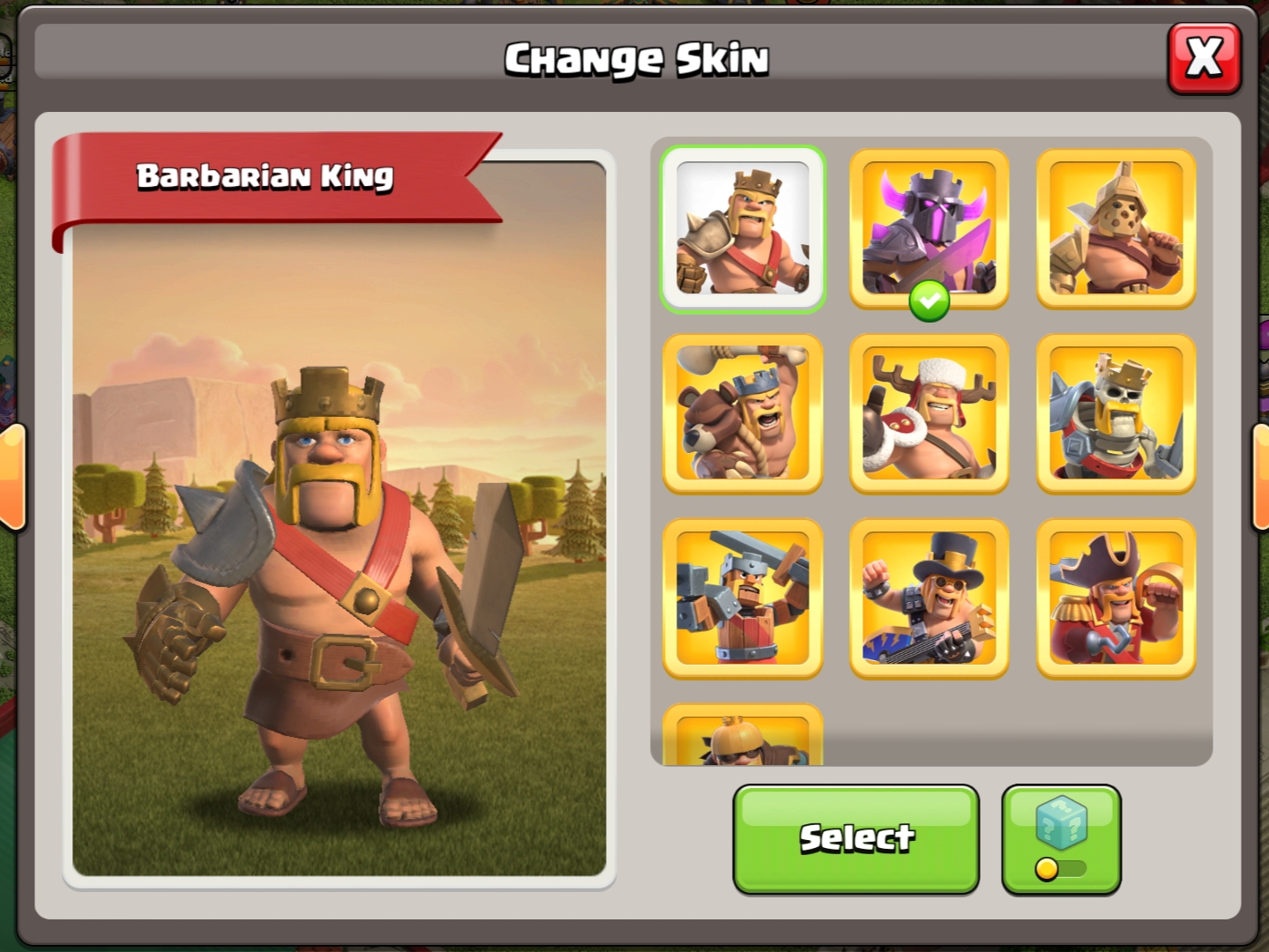 This is the regular skin that is available when the king is bought. Structure is simple but the strength of the king is not compromised.

He wears a crown of a king, has a big mighty sword and dresses too looks cool. This is a common skin for all freshers. 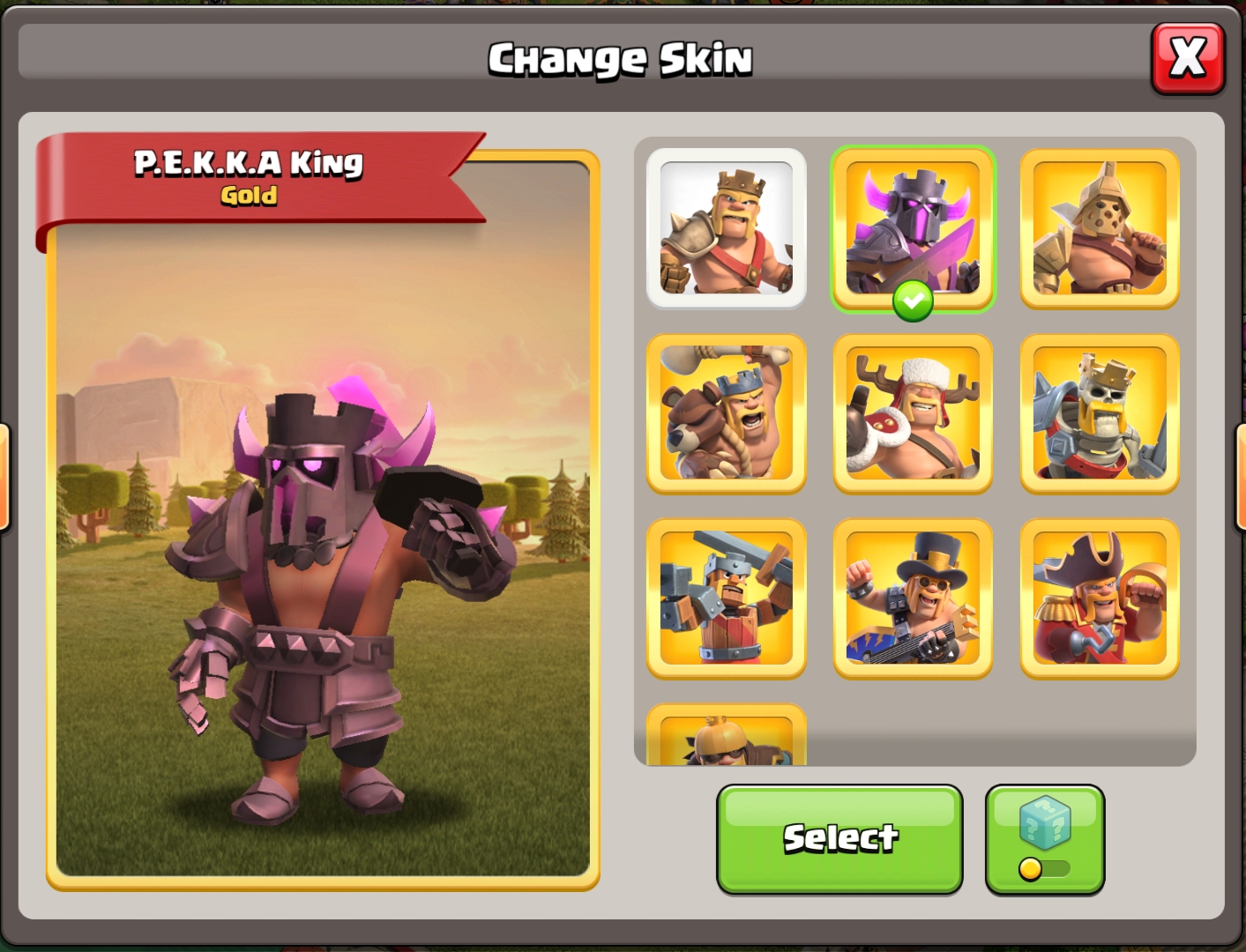 P.E.K.K.A King skin is or can be considered as the tribute to the most powerful troop, on whom, the traps too don't work. 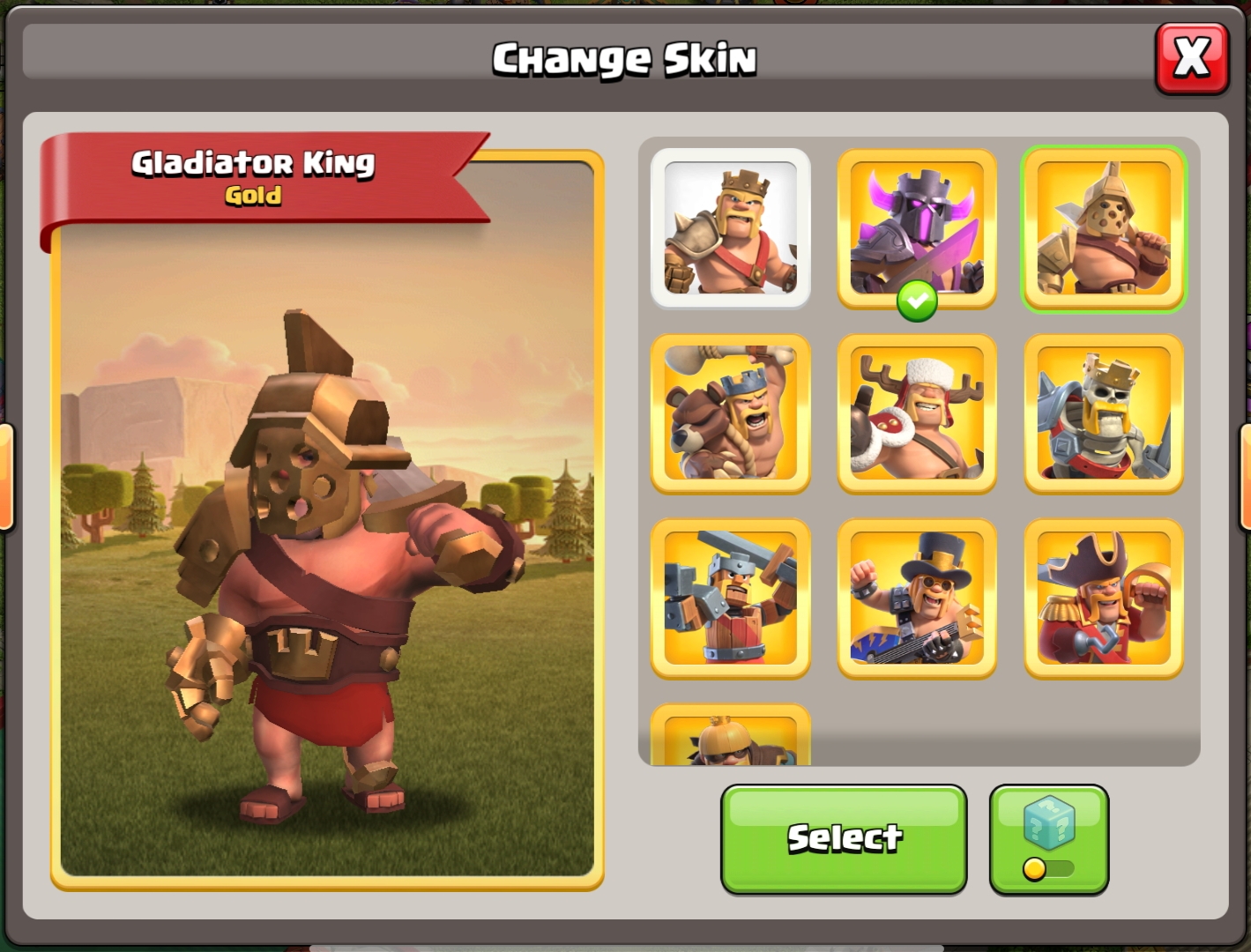 If you're familiar with the Gladiator movie, then the skins too will be known. The helmet is made very closely as shown in Gladiator.

Gloves and swords are given colour to show it as the Gladiator movie. 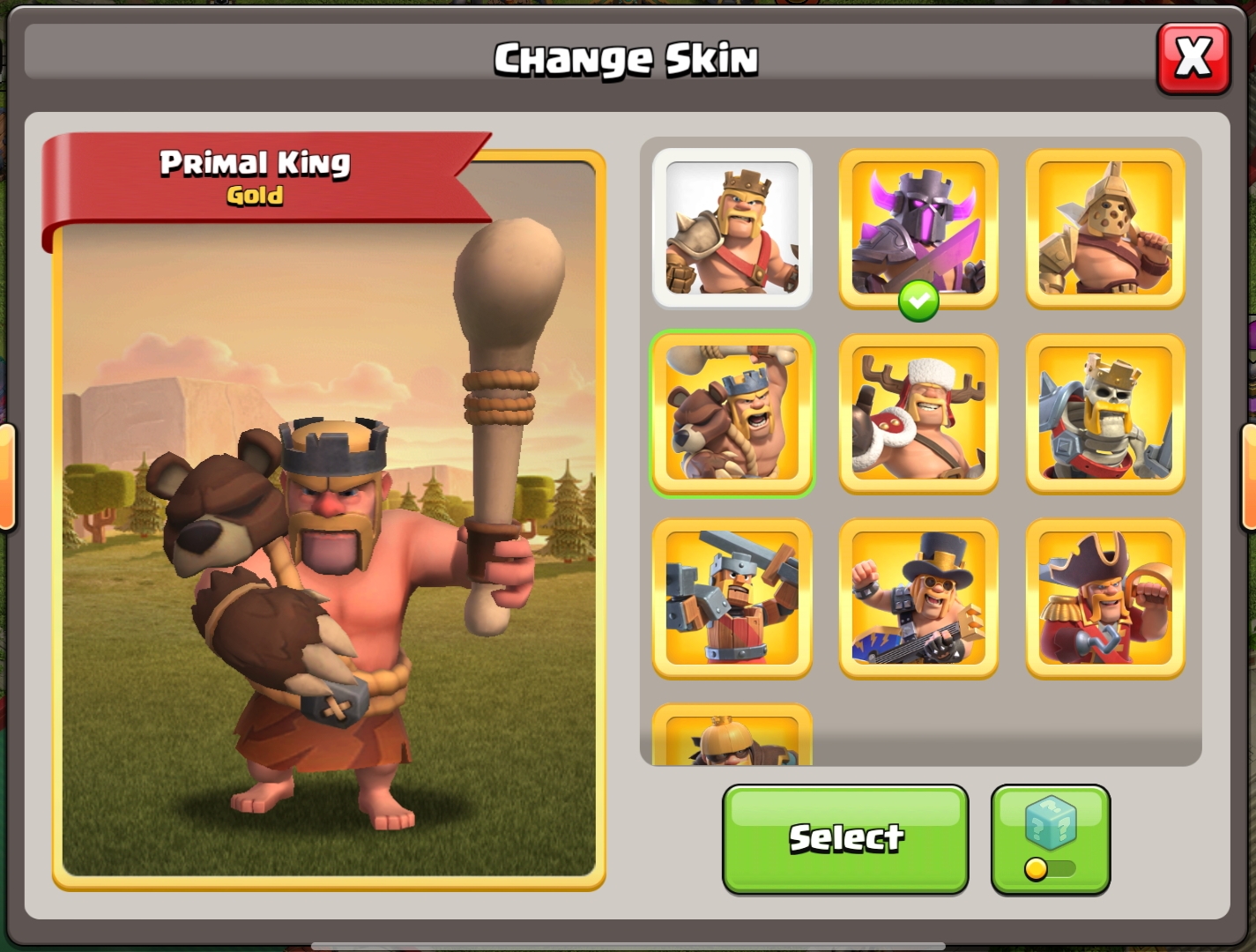 Primal is a Pokmon and the skin too has a doll type in its shoulder. Crown is shown in blending colour to the doll.

Hand is equipped with a magical stick-like item that will be used while raiding. Rope is tied either to work as a belt or to wrap the body. 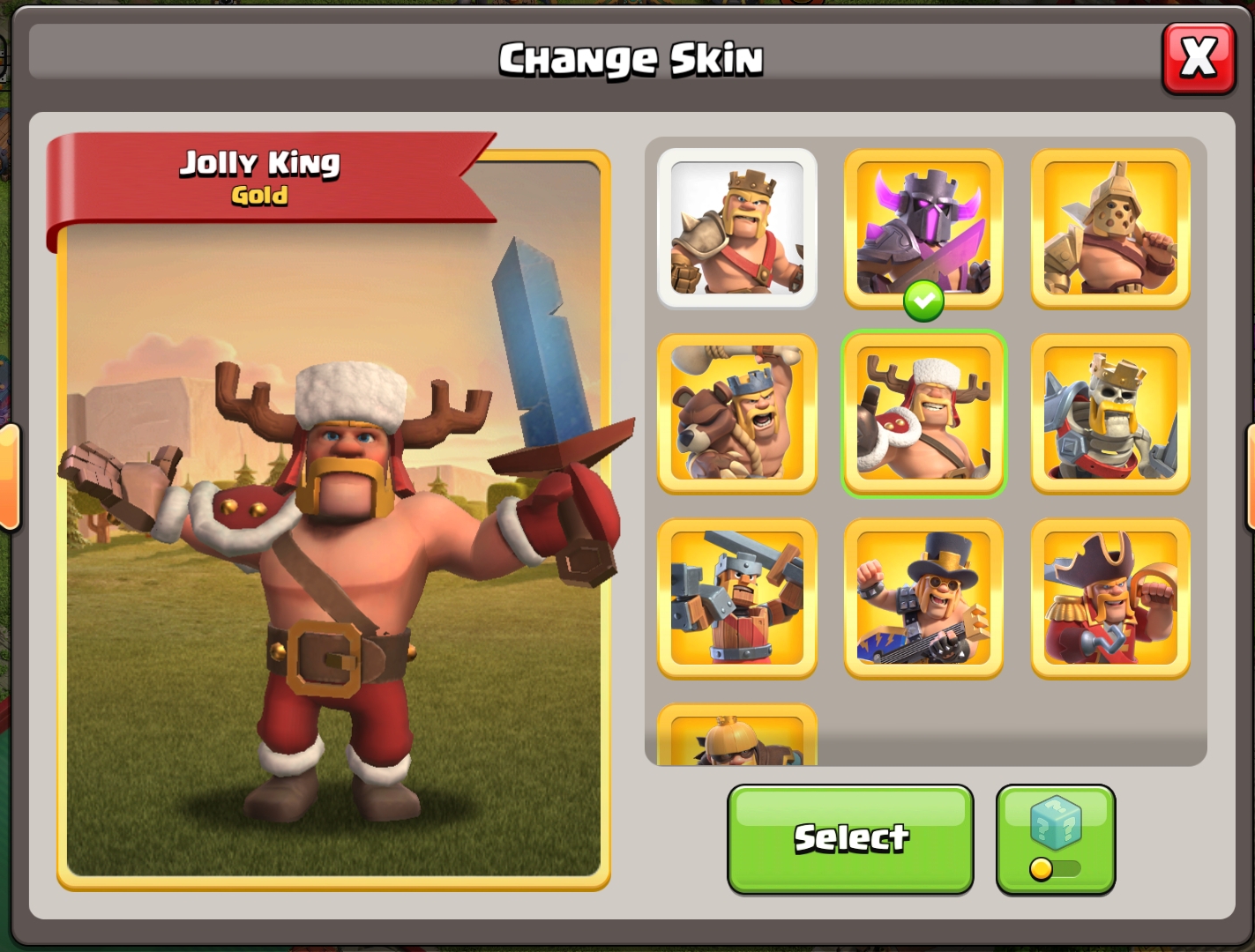 Jolly King skin is very much similar to Christmas. Maybe this skin was introduced during Christmas.

Crown is like Santa Claus with a deer-like structure. Right shoulder is covered with cloth that is wore by Santa Claus. 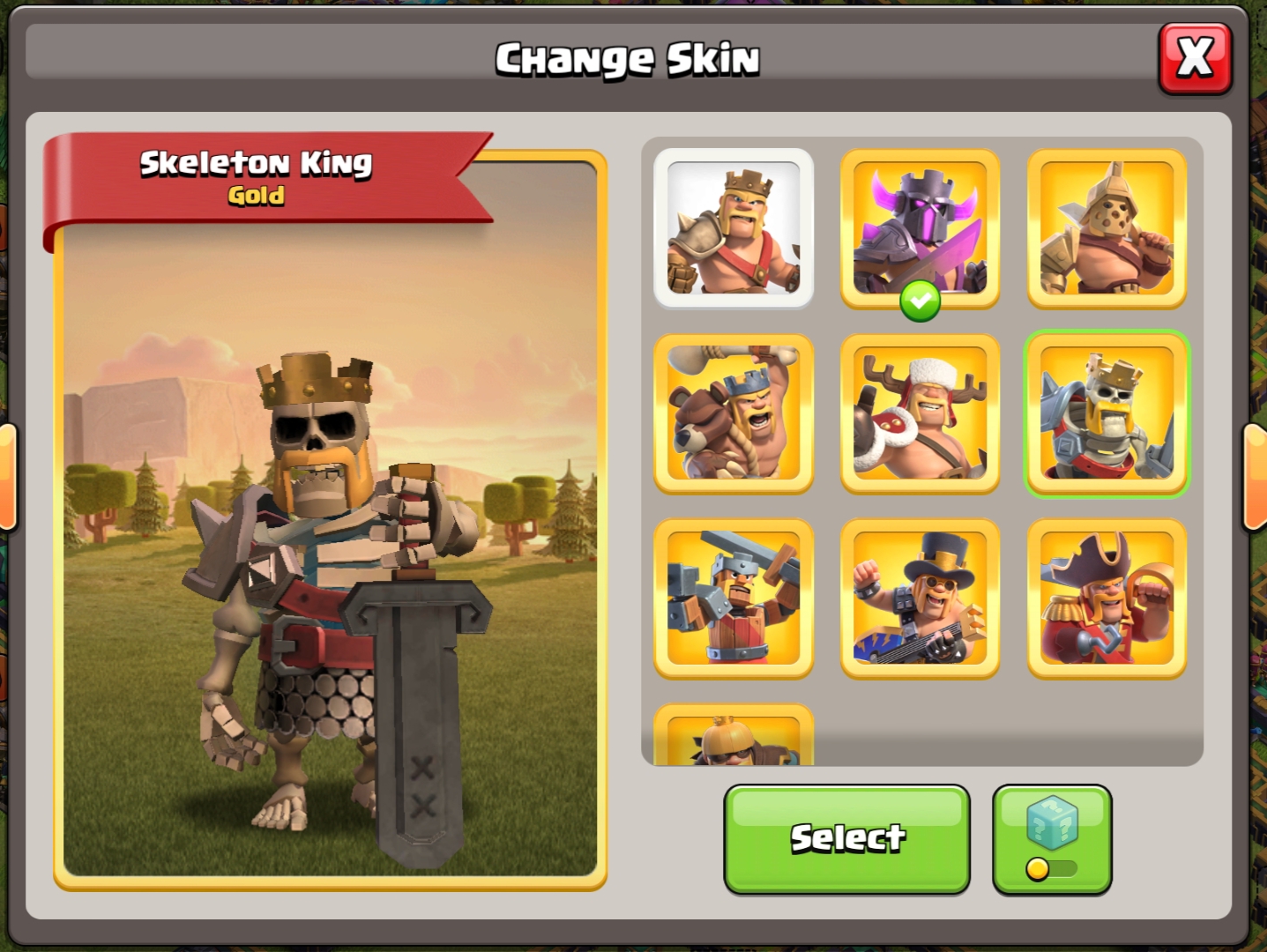 Skeleton skin is not a skin but the king with no muscles. He has a sword and a gold crown. Whole body is only Skeleton. Skin looks very beautiful too.

Clash of Clans has shown very funny animation. When the Skeleton king lifts the sword, his arm breaks and then he uses his other arm to fix the broken arm. 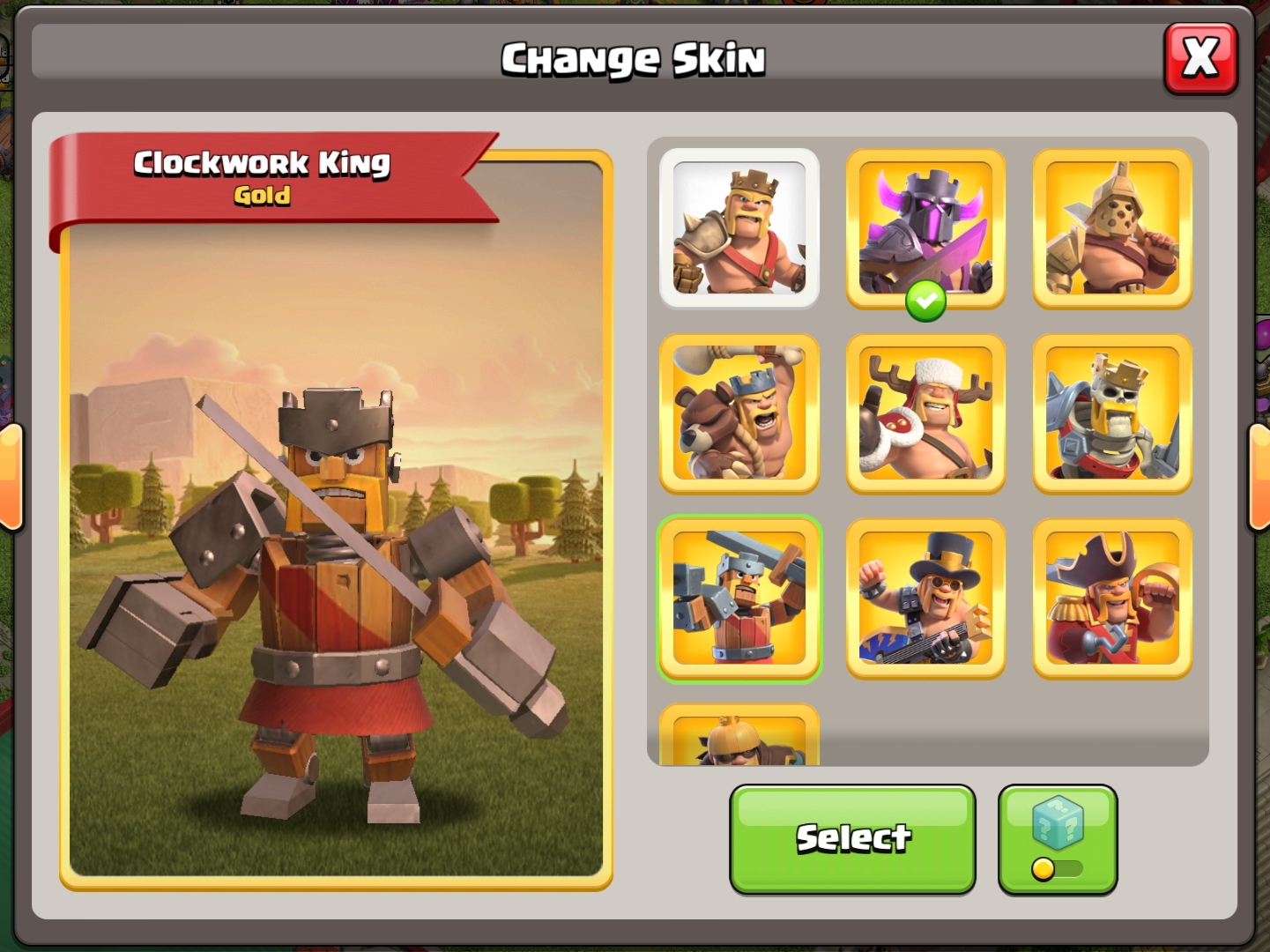 Clockwork King looks way too familiar with its name. He looks like a puppet with no strings. Maybe he is a puppet master. Nobody knows.

His whole body is made up of wood, hand and legs are like string puppets with a sword. 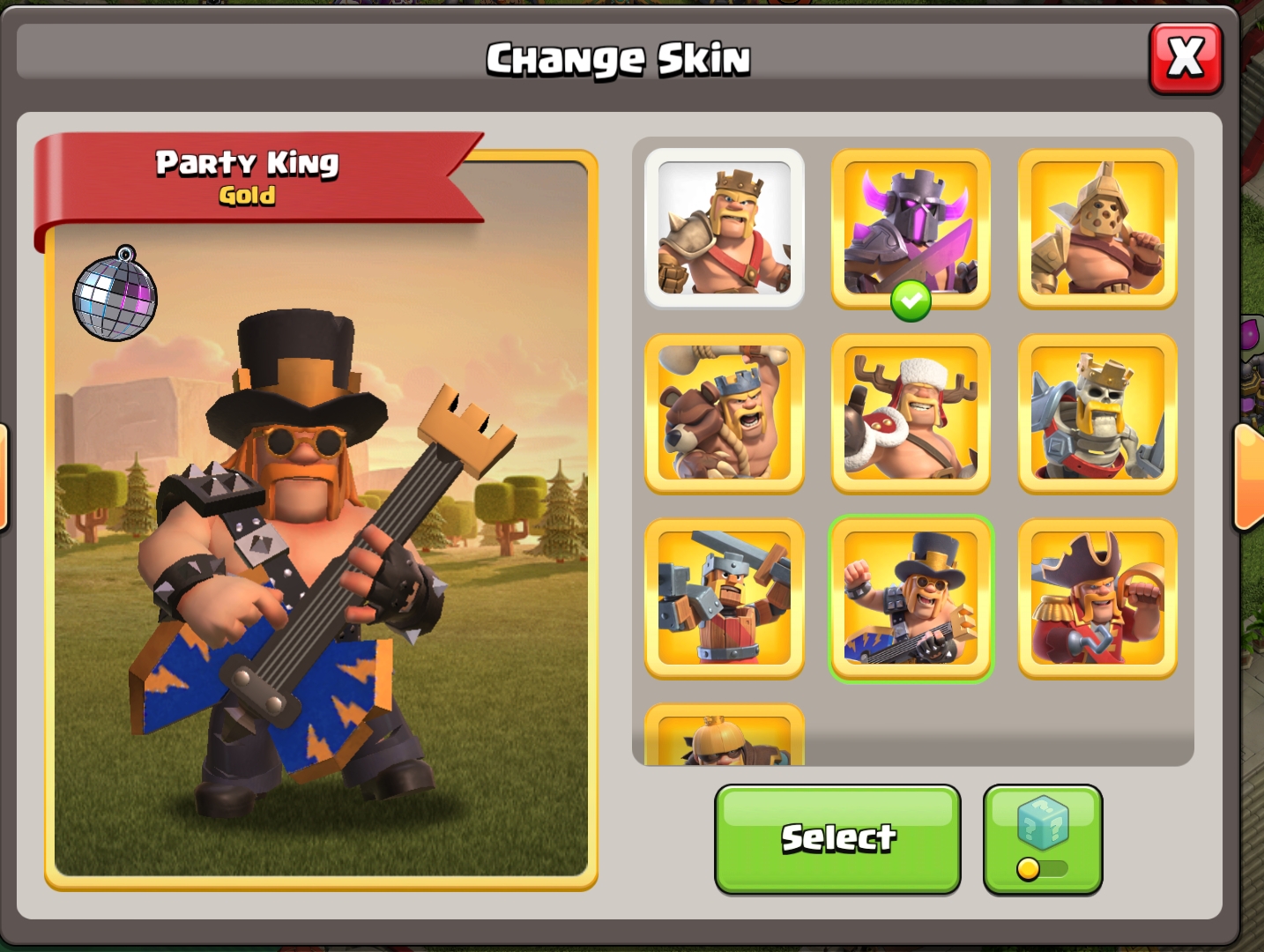 Party king is a skin that was introduced at the 20th anniversary. Therefore names as party king and given the same features.

He looks as if he is going to a party, and has a sword-like guitar. He wears a spectacle and also a party hat. Though we don't know whether he knows how to play a guitar. 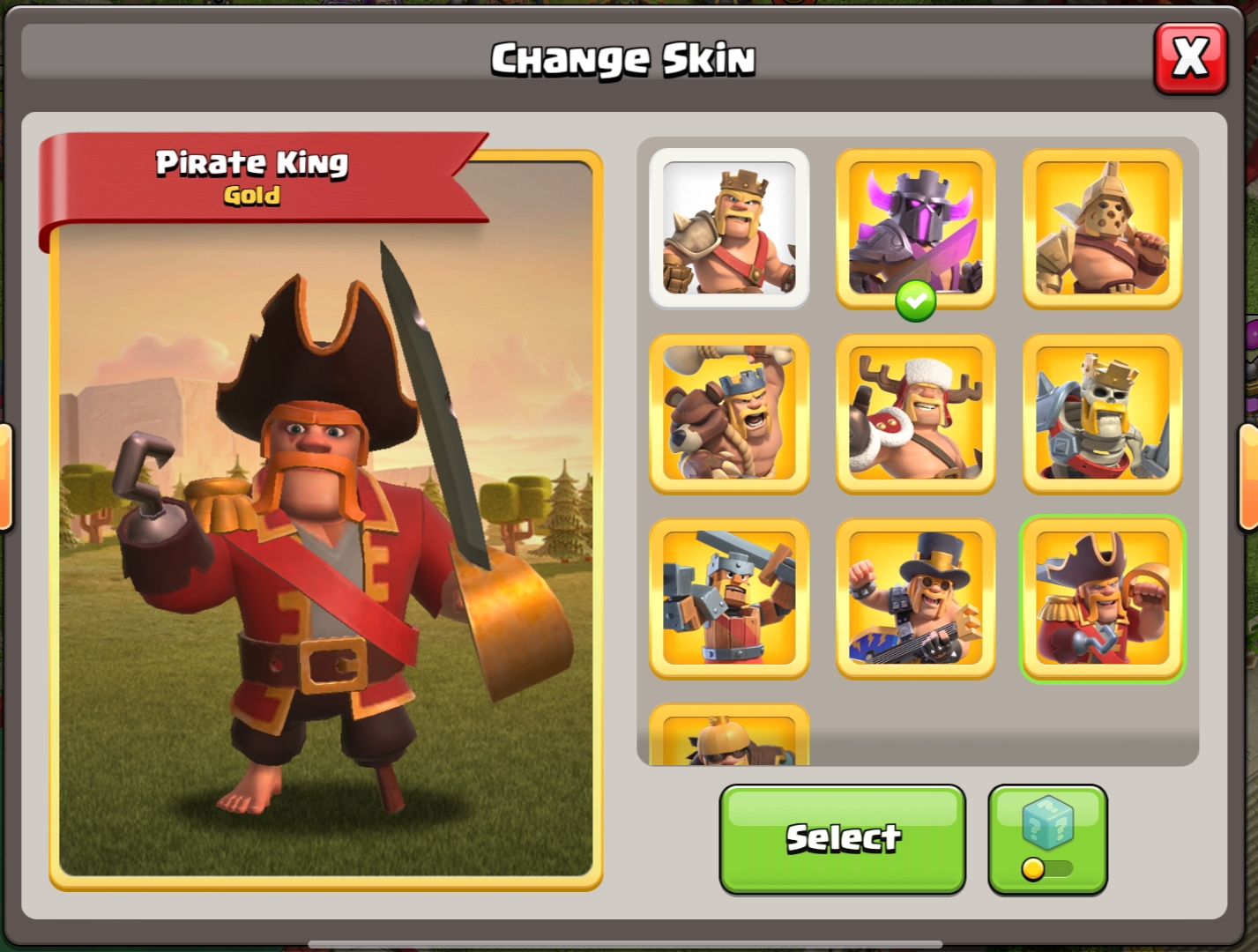 Pirate King skin reminds me of Barbosa, a character from Pirates of Caribbean. He looks very similar to him.

He has one wooden leg, one hooked arm and the other arm is a sword. He wears a captain hat and a red coloured jacket. 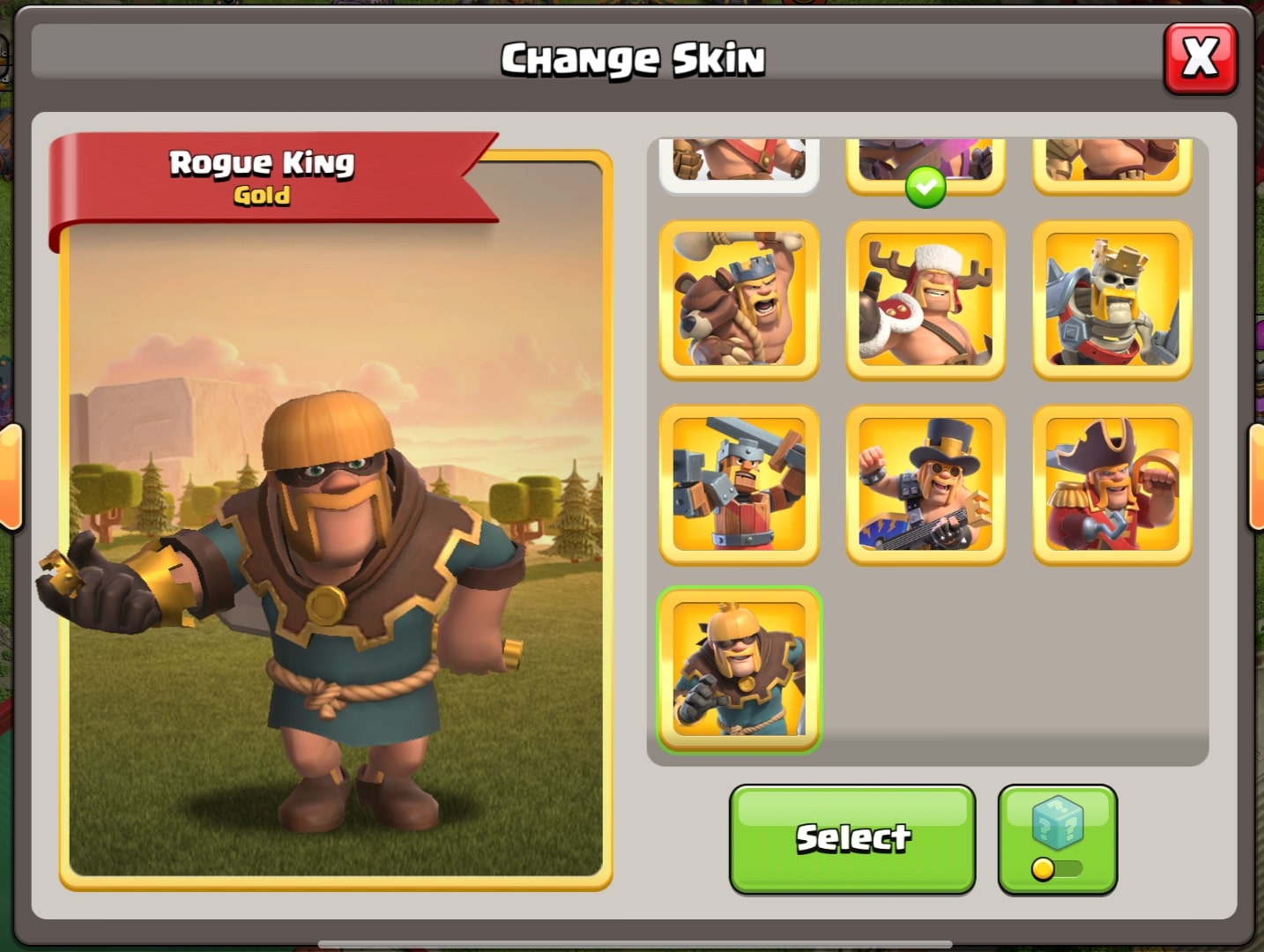 Rogue king skin says the king is dishonest but the reality seems to be little different than it. He assists the attack very sincerely.

He has a versatile sword. His haircut is a little dizzy and most of the people hate this skin due to its haircut. He wears a green-blue coloured jacket and a rope is tied to its wrist.