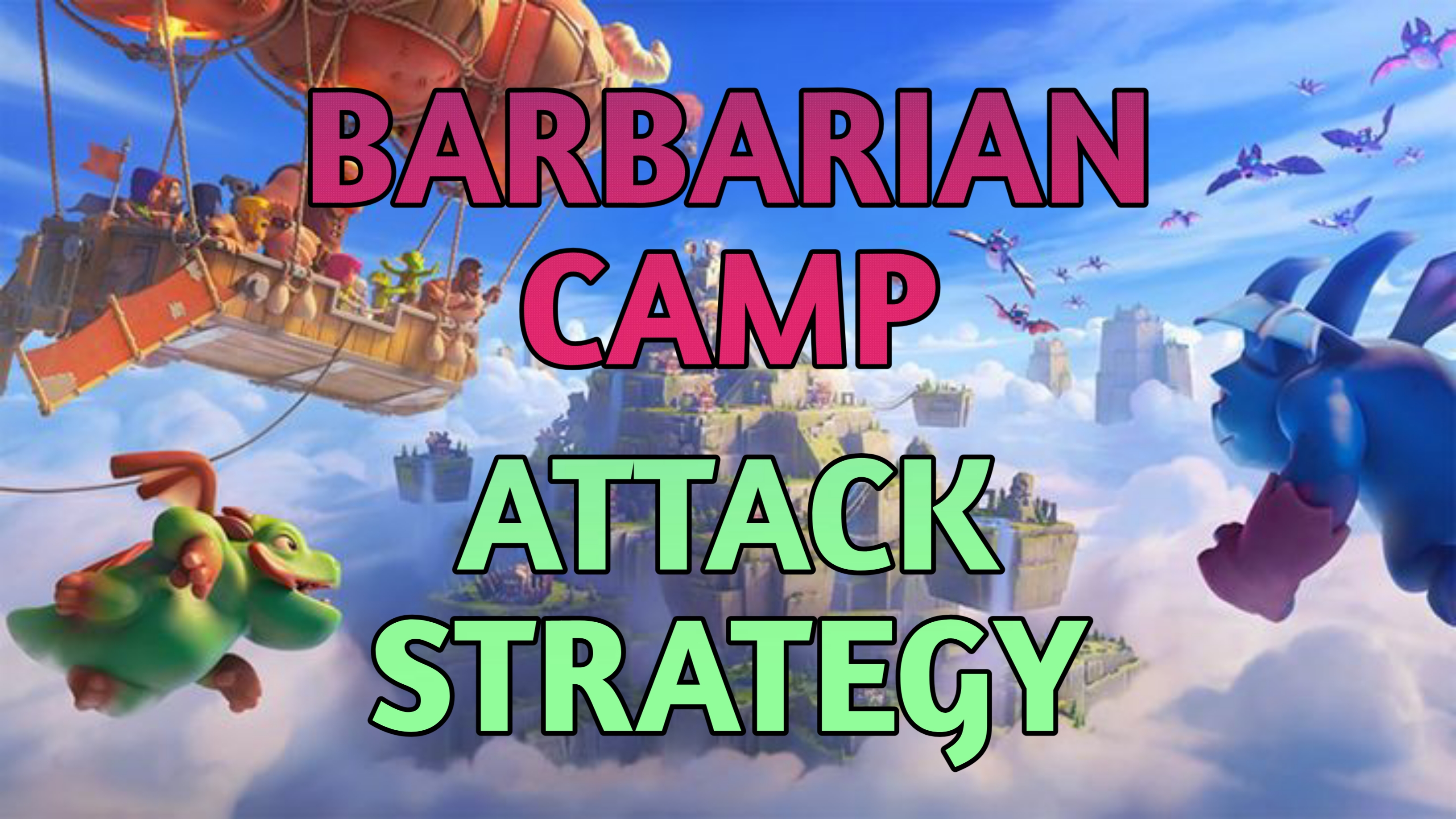 Barbarian Camp is the second district hall in the clan capital. It needs Capital Peak level 2 to unlock.
When the capital hall is upgraded to level 2, the barbarian camp is unlocked along with the troops like Super Barbarian and Sneaky Archers. This army can be used to attack the clan capital.

Upgrading capital peak to level 2 will need capital gold of 50,000. Then upgrading barracks will unlock the troops; Barbarian and Archers. Here, no spell is unlocked. TO unlock spells, one clan will need to unlock wizard valley.

At level 1 of the barbarian camp, we have housing space of only 90. Developers have said, it can take more than one attack to three star a base. So the first attack will be to clear the extra buildings.

These extra buildings are hurdles in clearing defences. Therefore once the buildings are cleared up, we can have an attacking strategy to destroy defence. So given is the best clan capital army to clean up for barbarian camp. 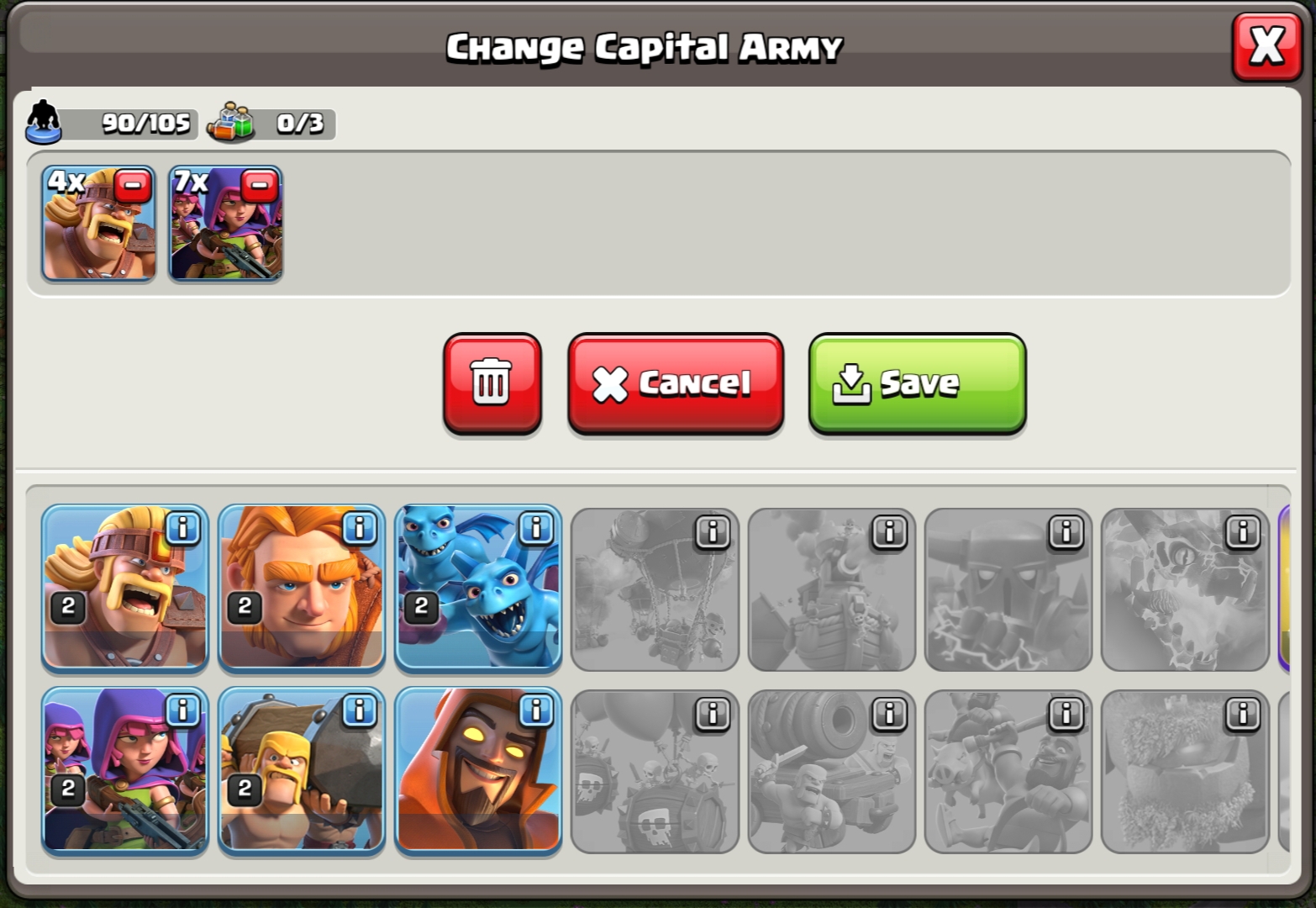 Super Barbarians are the most initial troops everywhere. It comes up with more damage per second than archers and also the hit points. Super barbarians are in rage mode for the first 8 seconds.

Sneaky Archers are second troops in the list. They have the special ability to be invisible for the first 5 seconds.
This can be used to have an upper hand in the battle. When archers are deployed, they are deployed in sets of 5, not individual.

How to attack in Barbarian Camp Level 1?

First attack will be to clean up the extra buildings. So we will deploy the archers and barbarian camps to have clean up, as big as possible. Most important thing to understand here is, we can even destroy 50% with this army, by just cleaning up.

When the buildings are cleared, we will change the army for the next attack. This attack will be for destroying defensive buildings. Therefore, the army will consist of the giants and battle rams. 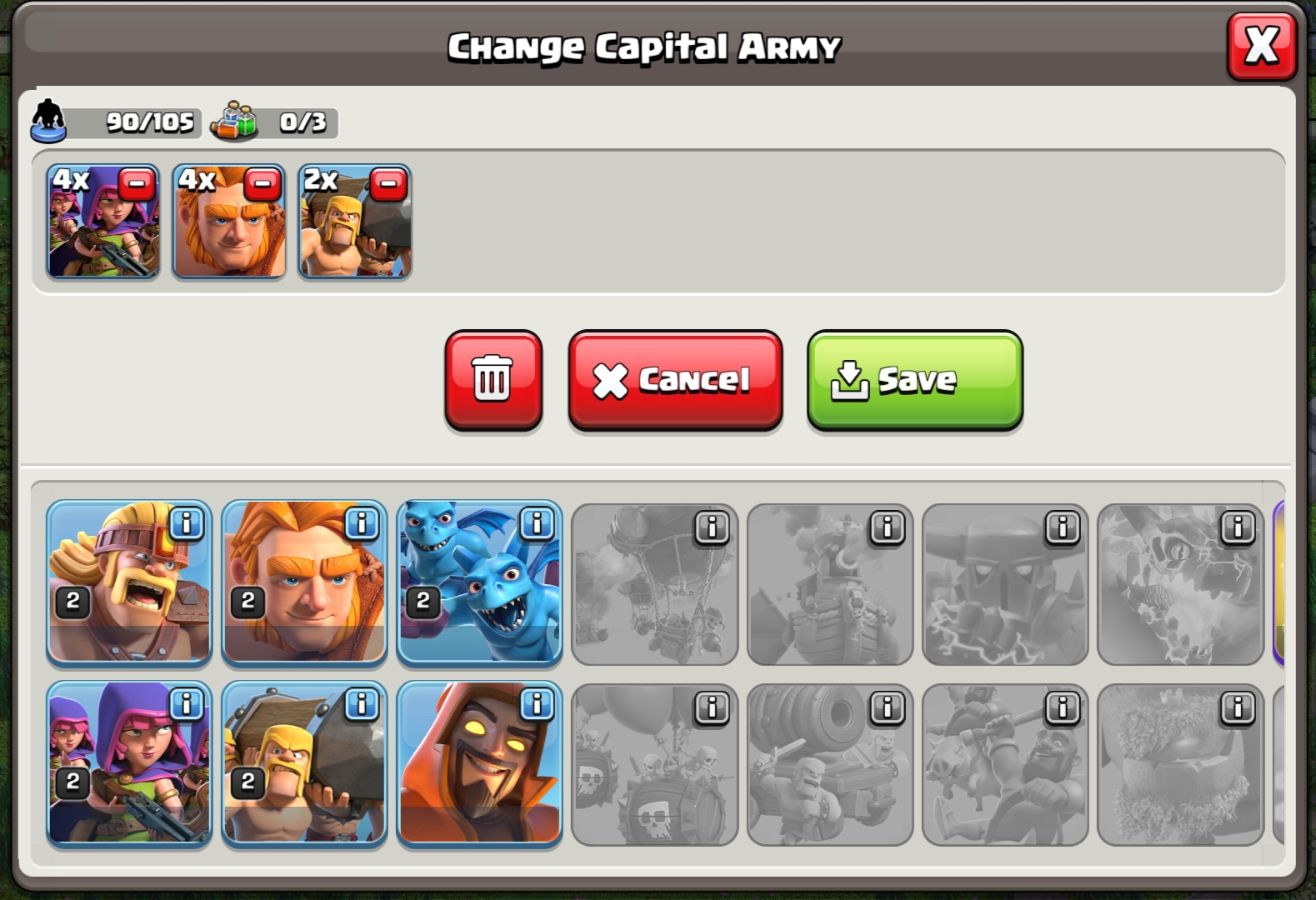 Now as the buildings are cleared, archers will directly support the giants in taking down defences. First, deploy the giants and follow them with battle rams. Battle rams will create a way through walls for giants.

As giants start attacking defences, use archers to assist them. Archer’s large damage per second will help giants. Use another battle ram to take down another wall. Use more archers and repeat the steps.

There are chances we will get three stars in a second attack, but in some rare cases if we weren’t able to do so, attack once again. You can add more archers if defences are less. Try to save the army. This will give us more capital gold.

Unlocking wizard valley will also unlock spells. First spell to be unlocked is the Healing Spell. We can make full use of it in this strategy. Now, we don’t need to have a cleanup army first. We can use wizards instead of archers. 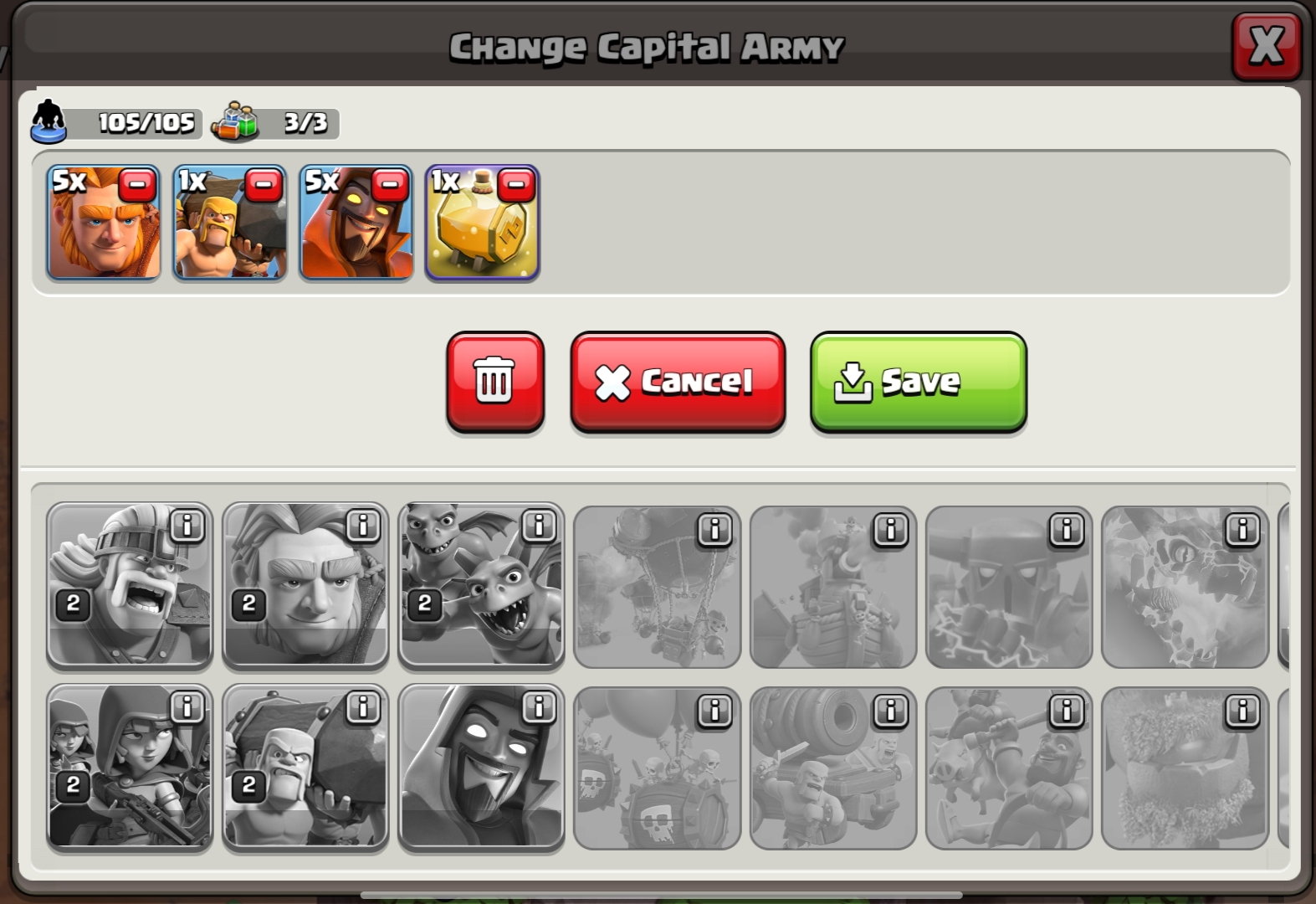 Initially, deploy the supergiants and battle rams. Follow them with all super wizards. Super wizards will destroy buildings and defences too.
Battle ram will open a space for giants to reach defensive buildings. Use a heal spell where you think necessary.

There are majority chances that base will be just one star or two star. SO attack with the same strategy. This time we will have the heal spell from the last attack deployed as well as our heal spell on deck.

Repeat the same steps mentioned above. The second attack will be so powerful to easily three star a base. With the same attack strategy, one player from our clan destroyed the barbarian camp completely. 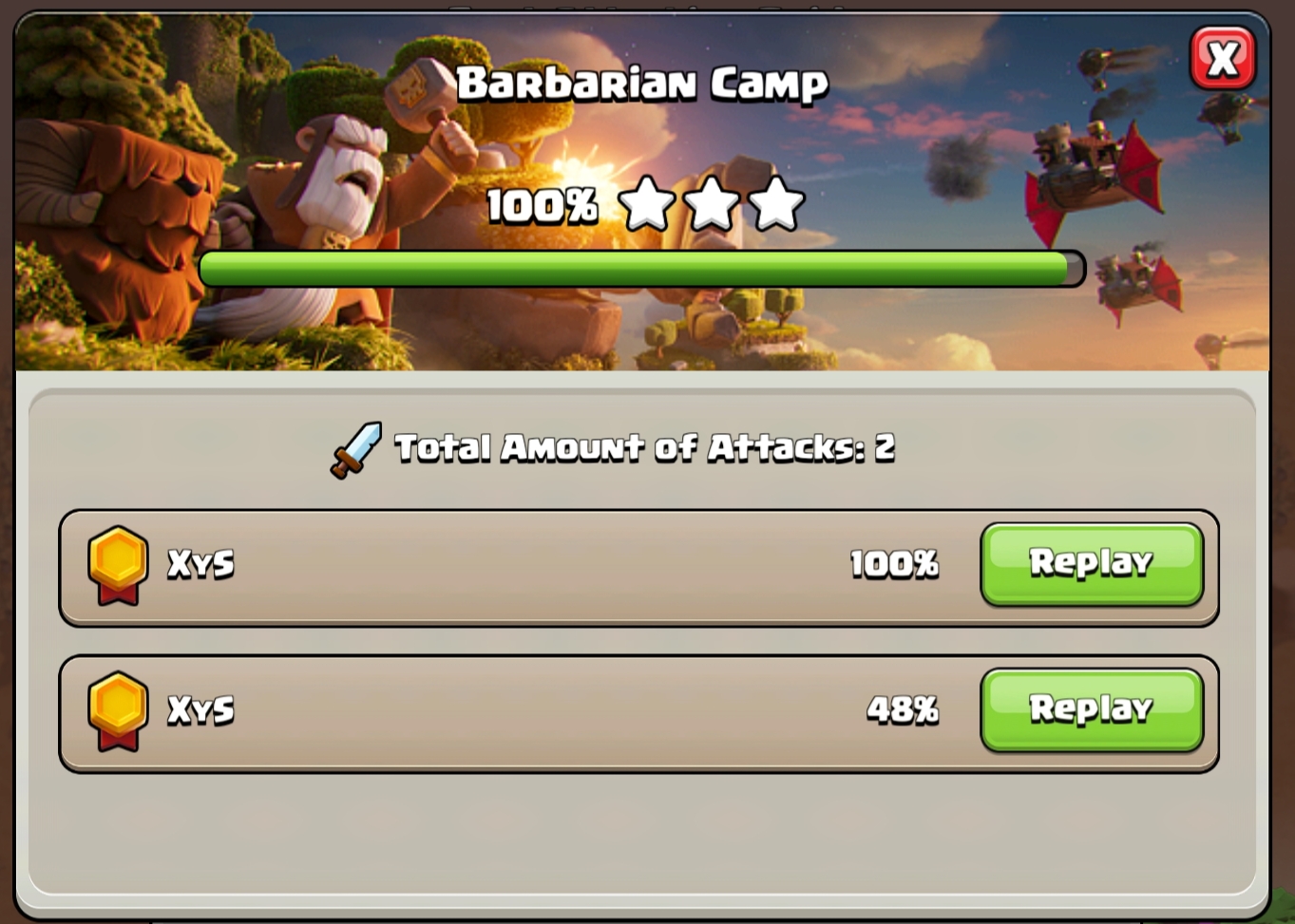 As shown in the above image, this is how powerful these armies are. This army is really flexible and you can do some minor changes. Like adding more archers as per need for clean up.